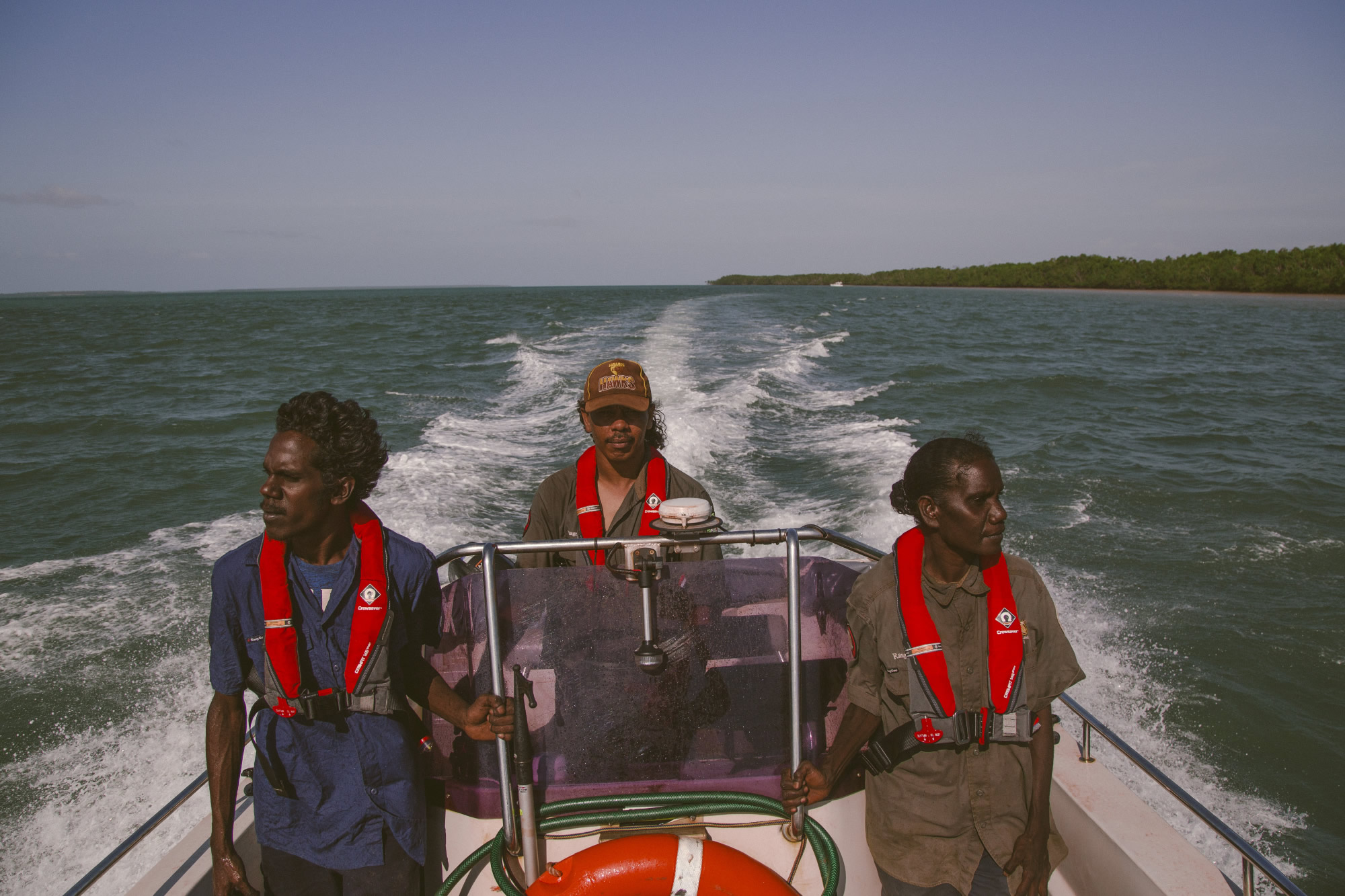 Yolngu law is one law - for land and sea

To the north the coastal landscapes include beaches, mangroves, reefs and offshore islands.

Since the beginning our old people have looked after saltwater country through ceremony, protecting sacred sites and following our Rom. The sea gives us fish, crabs, oysters, stingray and dugong in the right seasons.

Our Rom tells us to take only what we need — not too much. But now we no longer control what is taken from our saltwater country and this has affected the health of that country.

Commercial fishermen who use nets are taking too much. We know because fish populations are going down. Commercial fishermen come for barramundi and threadfin salmon but their nets also kill many tonnes of other sea animals which are left to rot and which change the behaviour of crocodiles and make them more dangerous.

Balanda laws say where and how fishermen can fish — the fishermen sometimes do the right things and sometimes the wrong things and can take too much. We can’t stop the Government giving out licences to commercial fishers but we can build a strong saltwater ranger program that watches out for all kinds of illegal behaviour.

If fishermen anchor their boats on sacred sites in the sea it’s like we are being speared — people can become sick or die. The Aboriginal Areas Protection Authority registered our sites and put out marker buoys. Many of these get dragged around by wind and tide.

Fishermen are now obliged to have the positions of our sites marked on their GPS and charts. Our sea rangers are being trained with enforcement skills by the Fisheries Branch so they use cameras and GPS to provide the evidence needed to take fishermen to court and force them to at least stay within the Balanda law.

Our sea rangers now have the skills to produce professional saltwater patrol reports. They are ready for stronger powers to manage what happens in the sea and on the areas where saltwater and freshwater mix.

From the deep water beyond the tidal zone, saltwater influence extends past the beach and well inland, south to the narrow entrance of the freshwater basin of the swamp.

The mangrove areas are vast. They are important breeding grounds for fish and support a vast array of marine species. They are the heart and lungs of our waterways.

We see small areas of dead mangroves. In the Gulf of Carpentaria huge areas of mangroves are being lost to what is called “die back”. We must increase monitoring of our mangrove areas.

We need to make it easier to get our ranger vessel out on patrol and have the resources to maintain our equipment in a harsh working environment. We need better equipment.

Our beaches once were clean but now all kind of rubbish drifts onto our shores from passing vessels and even from overseas — not just bottles and other rubbish but ghost nets as well. We want to keep our saltwater country clean and healthy, our sites protected and to get our people out onto country.

We are working with neighbouring clans and ranger groups to look after our saltwater country and there are plenty of healthy stingray and oysters.